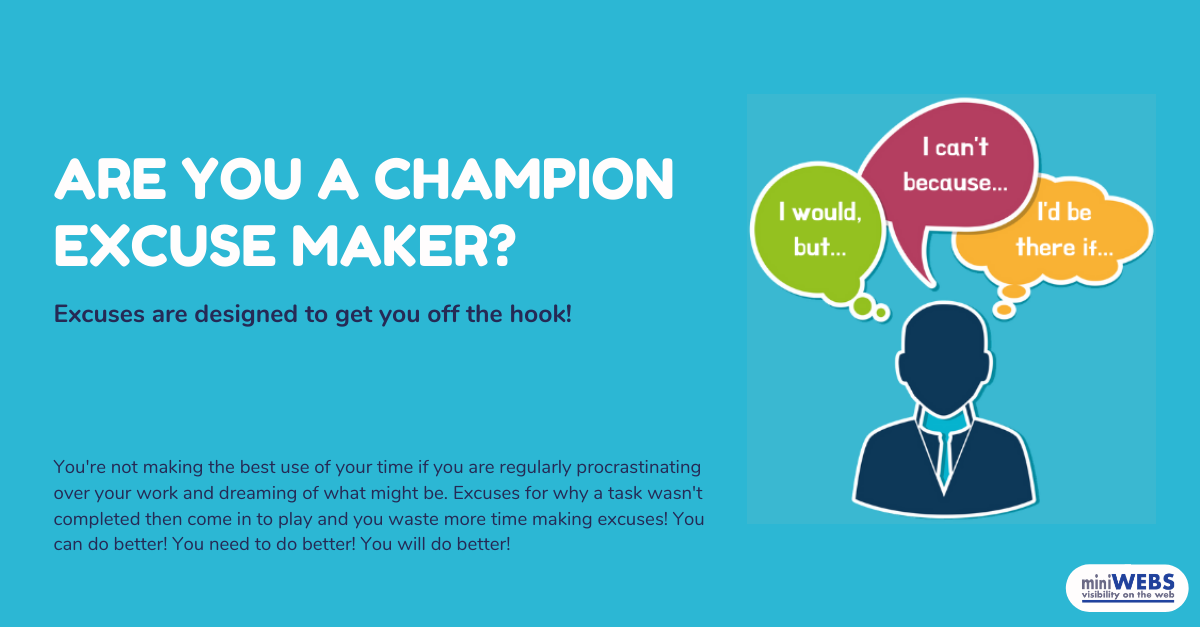 Are you a Champion Excuse Maker?

Do you frequently find yourself making excuses for what you did or didn't do? If so, this article's for you!

A caveat - when you admit the truth to yourself, don't make the truth sound horrendous.

Own up to your shortcomings. Acknowledge your truth. Then you can begin to improve your life. Sure excuses may get you off the hook for the moment, but as time goes on they rob you of a richer, more satisfying way of living.

Jeff was a middle-level manager who believed he was on the fast track to success. He had a good job at a design firm that he said he liked. Yet, his workday seemed less than satisfactory. Though he had plenty of work to do, his mind would drift to distractions. He invited interruptions - like phone calls, drop-in visitors, long lunches, sudden errands, preferring the novelty of the unexpected to the tedium of tending to the task at hand. Initially, those who worked for him thought he was a conscientious, caring man, when he told them, "No matter how busy I am, I'm always available if you need to talk or want a helping hand."

What they didn't realize was that his offers of help were actually pleas for a distraction from his own work. When Jeff was reprimanded by his boss for not completing reports on time, he excused himself from his failure, saying, "How could he expect me to get all that work done in such a short time?" After several such reprimands, he was let go. He explained his termination with excuses that began with it. "It was a terrible time in the economy. It was a poorly run company. It was their loss. "It" served as his excuse, protecting himself from acknowledging the real reason he was let go. Another lost opportunity to get real with himself!

"The future belongs to those who believe in the beauty of their dreams," said Eleanor Roosevelt. But it's not so beautiful if you maximize your time dreaming, minimize your doing. Then when called on the carpet, you waste your time excuse-making. You can do better! You need to do better! You will do better!

©2020 Linda Sapadin, Ph.D. is a psychologist, coach, and author in private practice who specializes in helping people overcome self-defeating patterns of behavior, especially procrastination, excuse-making, and excessive fear. You can reach her at LSapadin@DrSapadin.com

Book a Time to callContact us by email